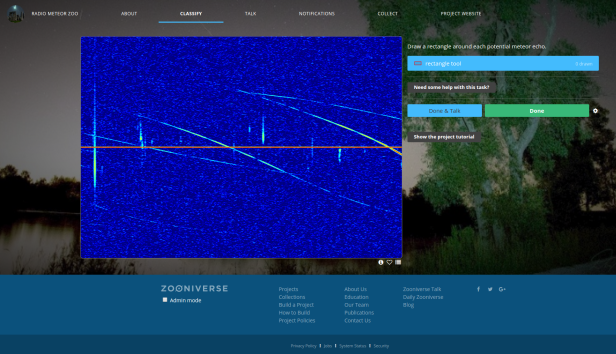 It’s my absolute pleasure to bring to you the latest Zooniverse project – Radio Meteor Zoo
Every day a huge amount of data is produced by the BRAMS (Belgian RAdio Meteor Stations) network with thousands of meteor echoes registered. The data are presented as images (called spectrograms) and automatic detection algorithms try to detect specific shapes associated with meteor echoes. However, none of them can perfectly mimic the human eye which stays the best detector. The problem is particularly striking during meteor showers, occurring when the Earth is passing through a cloud of dust particles left behind by a comet when it approaches the Sun. Many meteor echoes with complex shapes are then observed in the spectrograms. The Radio Meteor Zoo project starts with data from the Perseids 2016 (peaking around August 11-12) with dust particles belonging to comet Swift-Tuttle. We request the help of many eyes from citizen scientists around the world. Your help is invaluable!

Your meteor detections will be used to determine how many particles enter the Earth’s atmosphere per hour, to determine the peak time of meteor activity, to estimate the size distribution of the particles, and to compute trajectories of particles using data from multiple BRAMS receiving stations.

Get involved right now at www.zooniverse.org/projects/zooniverse/radio-meteor-zoo